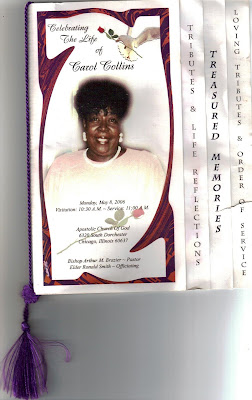 Now I know madness mondays are for those ancestors that drive you mad. Although Aunt Carol did not drive me mad, but she did a number on my mom and the family.

Although my NaNa  Odessa only had one girl(which is my mom), her and NaNa Dora were real good friends so mom and Aunt Carol grew up together. Once my NaNa Odessa passed away NaNa Dora stepped in a mother figure for my mom and our families grew from there. Aunt Carol was like a sister to my mom and thats the way she treated her just like a sister
.
All sisters and brothers argue but Aunt Carol was a totally different breed. She gave mom and Aunt Che Che(Angela) HELL!! She would cuss you out with a smile on her face. I used to laugh so hard because mom and Aunt Che Che would talk about her in a whisper, but Aunt Carol would say whatever she had to say about them in front of their faces. She would always tell me don't let them take advantage of you. See while at family gatherings everyone would be full so I would be left to put things away. Although Aunt Carol would be full too, she would always say make them help, but didn't offer any help herself. It was ok though i alwasy knew what she was trying to say. See once we moved to MD, she would call my mom everyday and leave these hour long messages on the anwsering machine and when you called her back, she would just say "where is your mama that piece of sh..". God I miss her.

On one visit home Aunt Che Che entertained us with a story about how my Aunt Carol lost NaNa Dora's medication and blamed it on everyone she could. She had Aunt Che Che so frustrated, she put Aunt Carol out of her house and Aunt CeChe was her ride home. Che Che said "she had me thinking that I lost the medicine".

See those are the things Aunt Carol did. She passed away suddenly from complications of COPD. She would not stop drinking or smoking. You would think that someone with the diease would change their bad
habits, but not Aunt Carol. She was her  own person and everyone knew that. I miss her so much that I have not returned to Chicago since her funeral which was 3 years ago. See whenever we flew home, that was where we stayed. One year she picked us up in a car that had flowers for an antienna. I laughed about it until she pulled over and told me to find my way. Although I have other family and freinds back home, that was always our first stop and where I stayed. She always made room for me and my boys and even when my mom traveled with the boys(without me) she would make my mom leave them with her so they didn.t have to get caught up in my mom's madness of trying to visit everyone.

I miss you Aunt Carol. I think she would be so proud of what I have done with the family genealolgy and her memory probably would have been much better than moms. I know it. RIP Aunt Carol!
Posted by Felicia R Mathis at 6:53 PM
Email ThisBlogThis!Share to TwitterShare to FacebookShare to Pinterest
Labels: Family Ancestor Genealogy Aunt