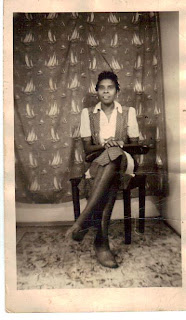 Pauline Turner is my great aunt, sister to my grandfather Robert L Smith.This family is as mysterious to me as my ROBERTSON line. Since I started my research, I wanted to know why Pauline and Robert had different last names and why they were found living with their grandmother? Have some answers, but not all.

Unfortunately, her father John was killed in a work related accident on June 15, 1904. At the time of his death he was employed by a saw-mill company. Marinda had recieved from his accidental death insurance policy an amount of $312.00. I know during the 1900s that this was probably a lot of money, but to me not enough.

I can only assume that after Mr. Turner passed away, Marinda married a Smith and had my grandfather two years later in 1906. Now who this Smith is lead me to another blog post. I am sad that Mr. Turner had his accident, but if not, then my grandfather would not have been born, met my grandmother, and had my mom.

Although NaNa Odessa kept in contact with Pauline down in MS, once she passed away my mom never did. I have no way of knowing if she married, had any children, or if and when she passed away. She looks like a really nice lady. I don't know, but its ok because I have this picture. She looks happy and thats enough for me. Maybe in future research, I will find the answers to my questions.
Felicia
Posted by Felicia R Mathis at 1:26 PM
Email ThisBlogThis!Share to TwitterShare to FacebookShare to Pinterest
Labels: Ancestor, Aunt, Family, Genealogy, Grandfather