CARNIVAL of AFRICAN AMERICAN GENEALOGY: HE SERVED WITH HONOR!

As a child I grew up with this picture of my Grandfather Robert L Smith sitting on my Mom's China Cabinet. 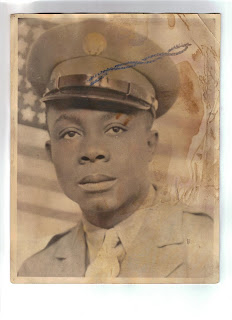 I always knew that my Grandfather served in World War II, but never knew exactly what that service was.
I can imagine him leaving his hometown in Brookhaven, MS going North for a better life and ending up in Chicago.
Then there was a call for men to join the Service and serve their country. Most men were drafted but my Grandfather enlisted. 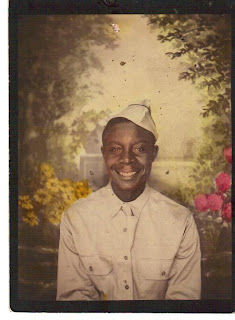 Term of Enlistment: Enlistment for the duration of the War or other emergency, plus six months, subject to the discretion of the President or otherwise according to law

According to his enlistment record he was seperated, but not from my Grandmother. His wife's name was Esther(which happens to be my Mom's middle name). I can see him joining to serve his country and looking toward the future.

Talking to Mom she told me that my Grandfather fought overseas and did see some kind of action. In fact she said he had seen one of his good friends killed. She said it messed him up really bad. I set out to see what his service was and why it had such an impact on my Grandfather. I know War is bad on any Human Being, but I needed to know exactly what my Grandfather did.

First I applied for his DD214(report of seperation), but of course his Army Records were burned in the fire at the Archives. 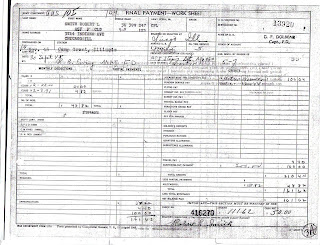 I was able to obtain his final pay record. At first everything was so foreign to me. I called my brother(who is in the Army) to try to help me make since of the record. He couldn't. In fact he told my Sister-in-law that I was yelling at him because he could not help me. I did not.
Just so happen that when I was waiting on my son to pick me up from Union Station from my trip to Savannah, I met a really nice man which happens to be an Veteran Advocate. I told him what I knew and what I had tried to do. He gave me his email address and told me to email him the Final Payment Record and he will see what he can do.
He was able to determine that my Grandfather was processed out at the Old Camp Grant, IL post on 10 Nov 1945. He was last in ARS staging detachment(APO 980). His actual date of transfer was 21 Oct 1945 and his Service no#36 399 247.
As you can see from his enlistment record he went in as a Private and came out as a Corporal.

I am still trying to get his actual service record and currently working on a FOIA Letter.

Although our African American Men were not given the recognition that they deserved for their Service and the sacrifices that they made to help keep this Country safe. I will always remember their efforts.

I just want to say Thank You and you're service will never be forgotten.